Synopsis– Choosing between the two frontend frameworks like angular vs react for any project is a matter of discussion. Angular and react are those front-end development frameworks that have taken the limelight, placed on the top 15 positions and became each other’s competition. Angular and react are two competitors used by numerous brands and popular within the tech world. They are the open source JavaScript libraries to create dynamic websites and web applications.

In this feature, we’ll know the procedure between the two including the maintenance, cost, best frameworks and much more.

What is React frontend JavaScript?

React js is an open-source JavaScript library created by Jordan Walke in 2013. This construction promoted an idea in web development known as component-based architecture. In Model View Controller (MVC) architecture, the view layer is liable for the application’s good looks.

It permits developers to reuse components to speed up the development and save time. It offers simple maintenance and a decent development.

Jordan Walke built Fax JS, the initial prototype of React frontend in 2011 and shipped a component on Facebook for its advertisement. Later on April 9, Instagram wanted to acquire this latest technology from Facebook.

After becoming open source by Pete Hunt in 2012, 2013 was the time to launch it officially. People were skeptical with its innovative technology and running gain in popularity, developers began to expand to tools like React Hot Loader and released the ‘PlanOut 0.5’.

In 2015 React js built the brand like Netflix and launched the ‘React Native for IOS and Android’.

It is a productive, adaptable, and open-source JavaScript library created to keep up with Facebook. It is equipped for delivering frontends of web applications that are simple, speedy, and scalable.

More than 220,000 globally acclaimed websites like Apple, BBC, PayPal, and Netflix today are using the react frontend platform for their applications.

It is because of its promising features that made the React frontend so popular and has ranked number 1.

Advantages and disadvantages of React js

Today, React js is picked by the vast majority of web developers. It offers an extremely rich JavaScript library and gives greater adaptability to the web developers to choose the manner in which they need it. 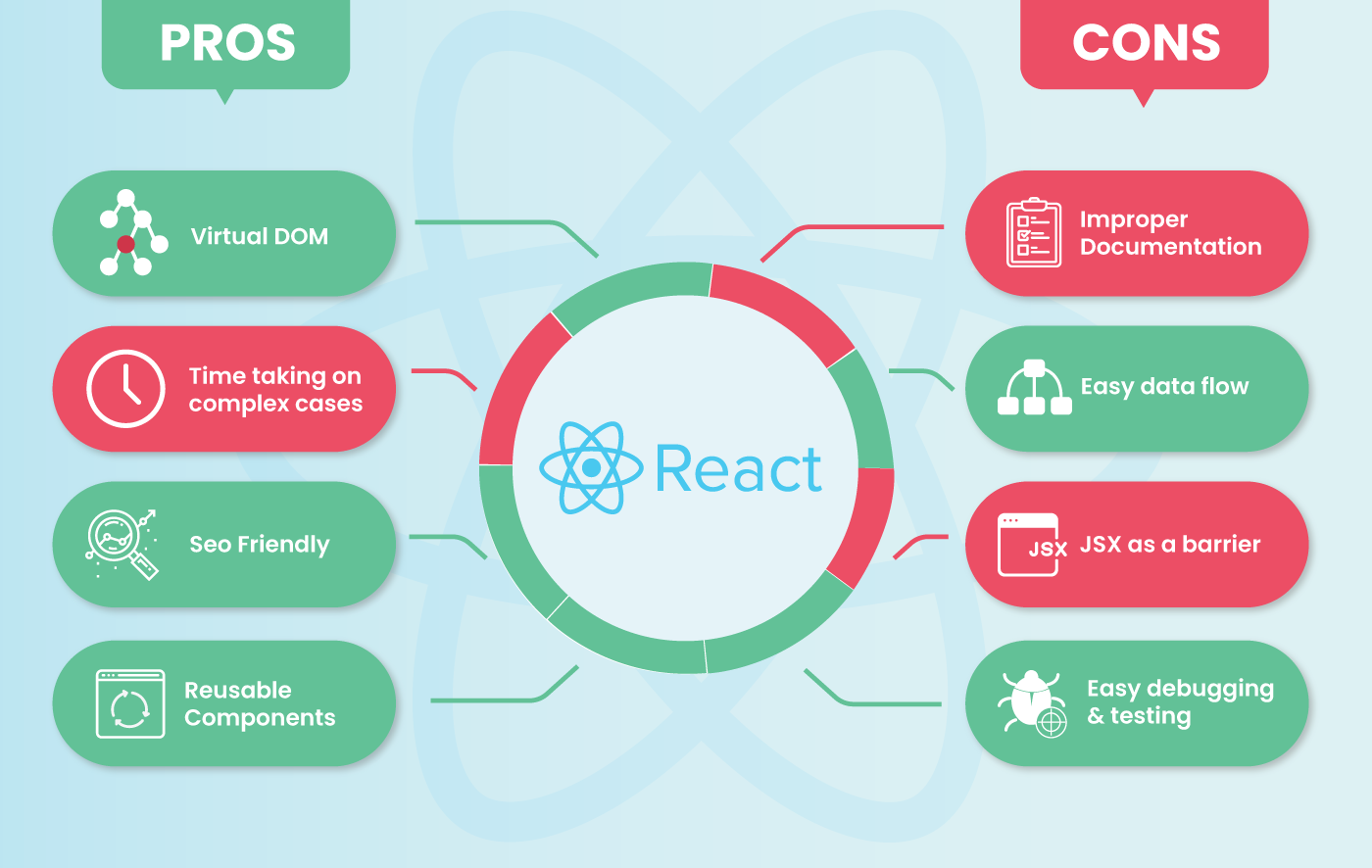 React js is the most practiced open-source JavaScript Library. It helps in making amazing web applications that require effortless coding. The primary goal of React is to create UIs (UI) working on the speed of the applications. There are significant advantages and disadvantages of React given as following:

What is Angular js?

Angular frontend is an open-source JavaScript structure written in Typescript. Google is responsible for maintaining it, and its main role is to create single-page applications. As a framework, angular has the benefit of additionally giving a standard design to engineers to work with. It empowers clients to make huge applications in a viable way.

Systems overall uplift web development effectiveness and execution by giving a steady design with the goal to avoid reconstructing code. Structures are time-savers offering developers a large group of additional features adding to the software without requiring extra work. 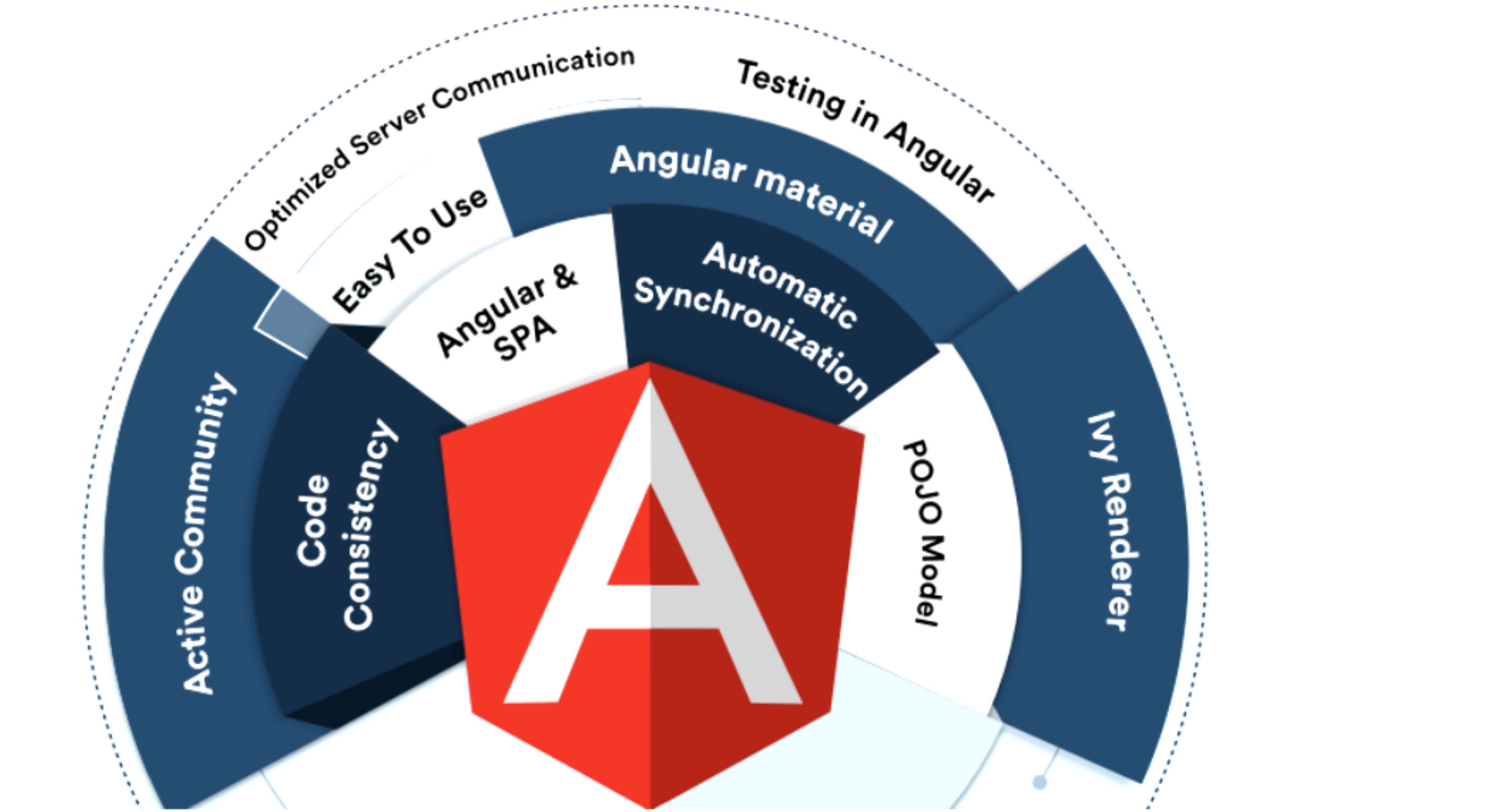 Advantages and disadvantages of Angular js

Angular js is not only a solitary piece in the general riddle of building the customer- side of a web application. It handles the whole DOM and AJAX glue code once you are composed and places it in a well-defined framework. Numerous versions of angular frontend have been delivered from its beginning. All versions have been added to the productive working of the structure. 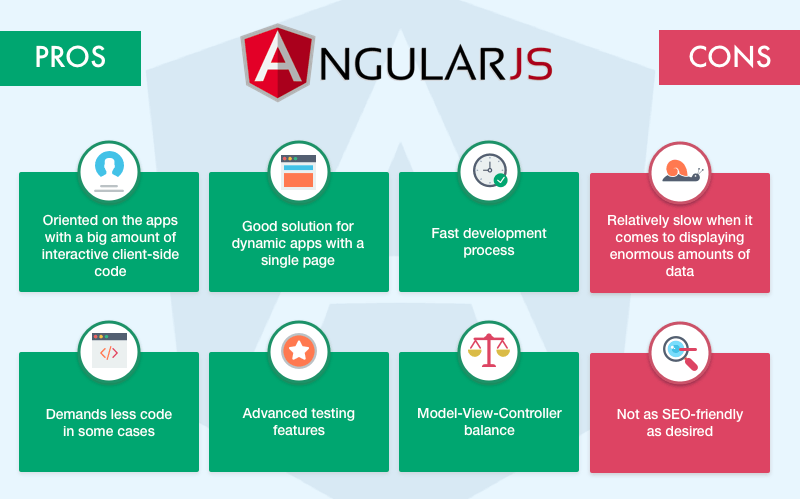 A few years ago, developers were discussing whether they ought to utilize Angular or React for their tasks. If you realize the absolute web application designing, you will discover Angular vs React doesn’t share much in common, the two of them can assist you with building robust and solid web applications. Picking one from the two is unquestionably an intense decision.

The below market statistics will clear your doubts regarding both the frameworks and will end up in solution.

The developers said they have utilized it previously and would practice it again with 13.6% in 2016 and 21.9% in 2019. This implies that Angular has stayed ineffectual to upgrade its market.

The developers using it before and would not like to practice it again were 6.4% in 2016 and 35.8% in 2019. This is a critical change and implies that the angular frontend is being neglected to meet the developer’s assumptions. The software engineers saying they have known about it and might want to learn were 39.7% in 2016 and 9.7% in 2019.

Therefore, we can witness that it’s a heavyweight structure, with restricted SEO, not up to that mark of the user’s desires with new updates, and learning hardships, developers are searching for the best other option because of these imperfections.

Nonetheless, Angular js is yet common among an enormous number of developers and is utilized to help numerous popular websites and web applications due to its Typescript coding and high architecture including Upwork, PayPal, The Guardian, and Sony.

The developers said they have known about it and might want to learn 35.3% in 2016, which is 12% in 2019. Through this Overview, we can wind up saying that React’s popularity has expanded till now. React frontend is generally popular for its utilization for native development using React Native. Moreover, it is a robust ecosystem offering reusable parts, SEO friendliness, and better execution.

Angular and react are some of the most outstanding and maintained JavaScript structures. It has many advantages making it appropriate for any business from new companies to global associations.

React js has plenty of elements that have made the system massively famous for website development. It has a view layer in MVC and a JavaScript library for making standout UIs. The positive effect of React is re-established in Q1 of Facebook in 2021. The month-to-month active clients of social media have preceded an astounding 2.85 billion in Q1 of 2021.

React js has some faultless components that have made it a fresher and surprisingly settled website. We will comprehend a few of the top runners in detail. 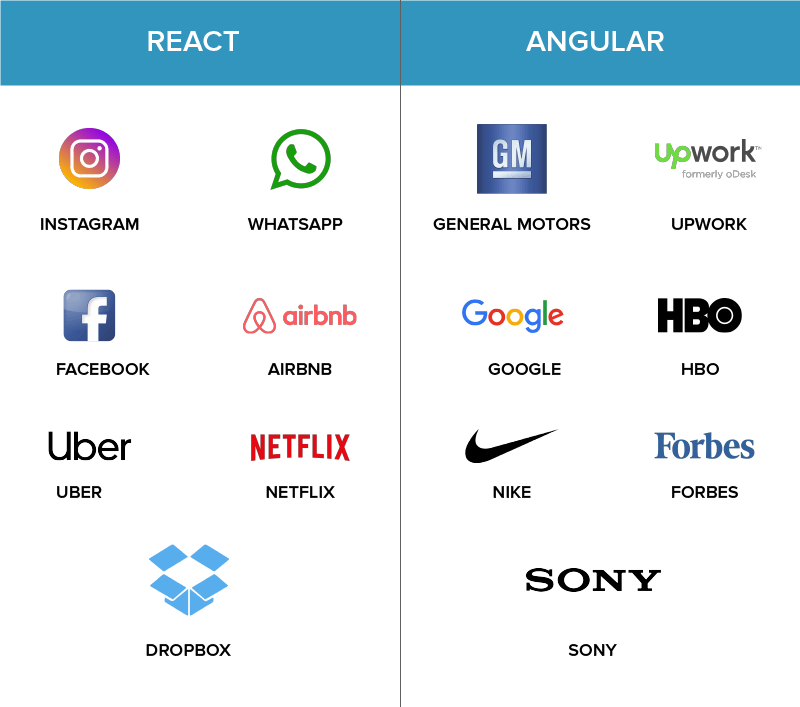 Difference between Angular and React

If you are utilizing JavaScript to construct an application, Angular and React will stay on the most famous structures ever. From user experience, execution to cost and compatibility; there are a few boundaries where React and Angular arise as more brilliant options for your front-end development projects.

To assist you with picking between Angular and React and show up at the best choice, let’s take a look to learn the crucial differences.

How to compare Angular and React with other frameworks?

Frontend structures are the pioneer sections of the software development procedure. However, there are countless alternatives to pick with regards to building visually appealing apps that rank good on user experience as it’s a first priority to select from it. So, let’s discuss the other frameworks apart from Angular and React to view other related relevance.

Factors to determine the suitable framework for frontend development: Angular vs React 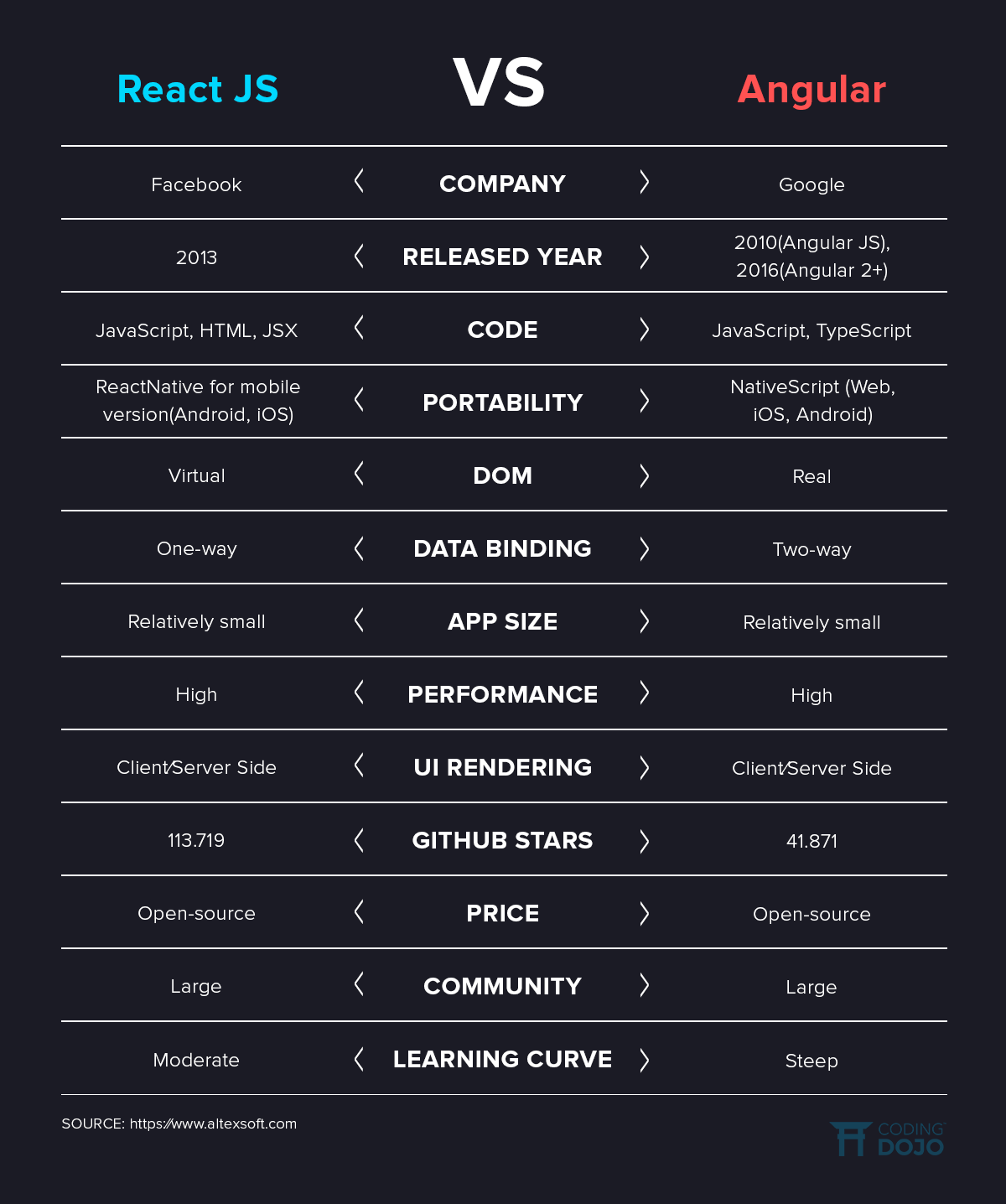 As technology changes regularly and so does web development. The acquirement for frontend development structures and libraries has massively become competitive. From all the accessible JavaScript frameworks and libraries, react and angular are the ones that are most operable among the developers and because of this, many developers look for Angular vs React.

Yet, how to pick the best between the two? Would it be a good idea for you to consider the project necessities to shape an exact choice? Or on the other hand, would it be advisable for you to think about its popularity and development time in an opening stage? Let’s take a look at some of the factors determining the suitable framework for the front end.

Angular vs React: Which one is best for your product?

While choosing a suitable JavaScript structure for the development of an outstanding web application, the developers have exactly got numerous choices accessible. It involves Angular, React, Vue, etc. but it has now turned into a dilemma for the developers as each one of the systems has its own timing of utilization.

When to pick Angular js?

When to pick React js?

React vs Angular: the best choice for Mobile App Development

Both React and Angular are extraordinary tools for application development. These two structures have loads of advantages but recently it has been proved that React works better compared to Angular. It is used more, popularly, and develops continuously. Also, React gets tremendous development community support.

React prevails upon Angular as it performs on virtual DOM and renders optimizations. In addition, it’s comfortable to relocate between React versions. You don’t need to introduce updates individually like Angular. At last, React gives a ton of answers for developers to accelerate their development time and lessen many errors.

Angular vs React: which one to choose for your Web application?

People believe that comparing Angular vs React is useless. One is a library dealing with views and the other is a complete system. Obviously, most React developers will add a couple of libraries to React for the transformation of a total framework. On the other hand, the subsequent workflow of this stack is often still different from Angular for the restricted comparability.

The huge difference is state management. Angular accompanies data-binding packaged in, while React today is typically increased by Redux to furnish unidirectional data flow and work with immutable data.

Inference to the topic

React frontend is picking a simple method to take care of business since it hasn’t a lot to do to organize an HTML and approaches to reuse the UI parts. While Angular js is single handedly taking care of various things without relying upon any extra assistance but tricky at the first time. ​In any case, the advantages anticipate the more expanded idea and overweigh the time contributed.

There is no fool proof structure for creating web-based applications with the desired qualities. A good approach is to get in touch with a faithful web development organization. Ateam soft solutions, our team of experienced web developers is completely prepared to meet your complex project requirements and build robust web applications. So, contact our project manager for more details at sales@ateamsoftsolutions.com.