The possibility of designing a new product is exciting, but there are many hurdles that companies must tackle when deciding on the best front-end system to fulfill their needs. JavaScript Frontend framework are common on the web because they make the job of web coders and designers much simpler while still providing a great user experience.

There has been a lot of movement in the front-end environment over the years, with new ideas for creating web apps surfacing. In this intensely competitive age, selecting the right technology stack is crucial to your project’s success. There are several reasons businesses choose one technology over another; some favor vertical stability, while others consider their development team’s core competencies.

This article compares and contrasts Angular, React, and Vue to help you determine which is the best solution for you.

A few years ago, developers were largely discussing whether to use Angular or React for their projects. However, over the last few years, we’ve seen an increase in interest in a third player known as Vue.js.

If you’re a developer who’s just starting a project and can’t decide which JavaScript frontend framework to use, this guide will assist you. This article isn’t just about Angular vs. React vs. Vue, but it also aims to provide a context for comparing front-end JavaScript frontend framework in general. You’ll exactly know what criteria to look at if a new system is published next year!

This article isn’t just about Angular vs. React vs. Vue, but it also aims to provide a context for comparing front-end JavaScript frameworks in general. You’ll know what criteria to look at if a new system is published next year! 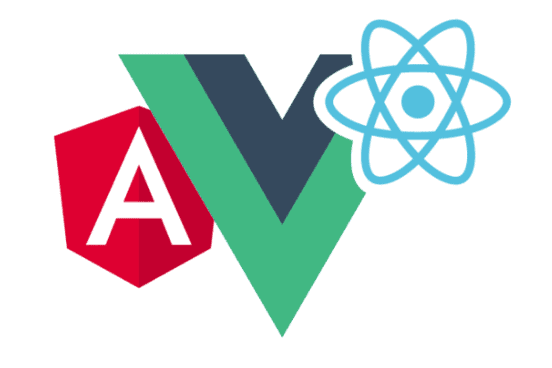 Vue Vs React Vs Angular: A Brief History

Before we get into the technical specifics, let’s take a look at the past of these systems to understand their theory and evolution over time better.

Google’s Angular was first published in 2010, making it the oldest of the bunch. It’s a JavaScript application based on TypeScript. With the introduction of Angular 2 in 2016 (and the omission of the “JS” from the original name – AngularJS), a major change occurred. Angular 2+ is commonly referred to as Angular. While AngularJS (version 1) is still receiving updates, we will concentrate on Angular.

Vue, also recognized as Vue.js, is the group’s newest member. Evan You, a former Google employee, founded it in 2014. Vue has seen a huge rise in popularity over the last three years, even though a big organization does not sponsor it. 3.0 is the most recent stable update, which was released in September 2020. (with some small incremental releases since then). Patreon offers to fund Vue contributors. It’s worth remembering that Vue 3 now has its own GitHub repo and has transitioned to TypeScript.

Facebook’s React system was first published in 2013. Facebook makes extensive use of React in their products (Facebook, Instagram, and WhatsApp). The latest stable version is 17.X, released in October 2020 (with smaller incremental updates since then).

Have a look at the group to determine these frameworks’ progress now that you’re familiar with the past and recent developments for each of these frameworks. You have already seen that gradual releases have been shipped regularly for all of the frameworks over the last year, indicating that development is still in full swing.

Vue has a large number of watchers, stars, and forks as compared to React. It illustrates Vue’s consumer success as well as its importance when opposed to React. Vue, on the other hand, has fewer contributors than Angular and React.

One reason may be that Vue is entirely powered by the open-source community, while Angular and React also have a large number of Google and Facebook employees contributing to the libraries.

According to the statistics, all three projects are showing considerable development activity, which will certainly continue in the future — however, these statistics cannot be used to justify not using any of them.

React is the most installed platform, according to NPM trends. That does not, however, imply that they are the greatest. To determine the best choice, you must conduct additional surveys.

React is in the first place, with Angular in second place.

When comparing Angular, React, and Vue’s success in 2020, Stack Overflow Trends shows that React has the highest percentage, accompanied by Angular. Vue’s popularity, on the other hand, has been steadily increasing in recent years.

Vue is the most popular framework on GitHub, followed by React.

The statistics on Github Repositories are both shocking and exciting. On the one side, React has the highest rate of forks and views, but Vue has the highest number of stars.

Angular Vs React Vs Vue: Use cases

Since JavaScript frameworks evolve rapidly, we now have regularly updated versions of Angular, React, and another player on the market — Vue.js.

Angular was designed to work in tandem with Typescript. He’s got many people behind him—Angular-language-service — which adds intelligence and autocomplete to external HTML template files used by components.

Detailed documentation that helps an independent developer to obtain all relevant details without having to consult his colleagues. However, this necessitates more educational time. One-way data-binding allows the app to behave uniquely, reducing the probability of errors.

Since data binding is one-way, there are fewer undesirable side effects.

The most common framework for managing application state in React, Redux, is simple to pick up and master.

Vue.js shares several characteristics with Angular, which can aid in the optimization of HTML block handling with the use of various components.

Vue.js has very sparse documentation, which can help developers speed up their learning curve and save a lot of time by allowing them to create apps with only a limited understanding of HTML and JavaScript.

The design and architecture similarities with Angular and React allow for a quick transition from other frameworks to Vue.js.

Angular vs React vs Vue: Performance

One of the most important things to consider when developing a frontend application is efficiency. Bear in mind that the DOM is considered the UI of any program when assessing the output of Angular, React, and Vue. React, and Angular respond differently to updating HTML files, but Vue combines the best of both frameworks. Let’s take a closer look at the Angular vs. React vs. Vue comparison:

Angular is a common Javascript framework that uses real DOM and is better suited for single-page applications with frequently updated content.

Second, Angular uses a Two-Way Data Binding mechanism that securely, efficiently, and intuitively replicates all changes made in the Model into the views.

React is a front-end library that makes use of the Virtual DOM to improve the performance of any app that needs frequent content updates. Take, for instance, Instagram.

React is built on the concept of a single-direction data flow. This will give you more leverage over the project as a whole.

Vue is the newest JS platform, built with amazing features to help developers overcome the limitations of Angular and React. It combines the best features of React and Angular, and as a result, it makes use of the virtual DOM to provide high performance and memory allocation.

Testing in Angular, React, and Vue

Since you can pass in a component’s requirements and stub or mock them as you wish, AngularJS comes with dependency injection built-in, which makes testing components far simpler.

Elements with their dependencies inserted can be criticized on a test-by-test level without having to mess with any global variables that might impact another test unintentionally.

Jasmine is a JavaScript behavior-driven development platform that has quickly become the most common way to evaluate AngularJS applications. Jasmine has functions that can help you structure your tests and make statements. It’s critical to keep your tests well-structured and recorded as they evolve, and Jasmine can help with that.

Jest is a JavaScript test runner that uses jsdom to give you access to the DOM. While jsdom is only a rough representation of how the browser operates, it is frequently sufficient for testing React components. Jest combines quick iteration with powerful features such as mocking modules and timers to give you more control about how your code runs.

The React Testing Library is a collection of helpers that allow you to test React components without having to worry about their implementation information. This method simplifies refactoring while still pointing you in the direction of usability best practices. While there is no way to make a component without its children “shallowly,” a test runner like Jest allows you to do so by mocking.

Specific units of code can be tested independently using unit tests. Unit testing aims to give developers peace of mind about their code. You gain trust that as new features are added, or your code is refactored, your application will remain usable and stable by writing rigorous, practical tests.

Factors to consider while choosing your front-end framework

1.Rendering on the server

A better user experience is provided by server-side rendering, particularly over mobile networks. It is particularly true for content-driven pages, where a shortage of them can lead to lower search engine rankings. While Angular was one of the first commonly used front-end frameworks to lack server-side processing, the updated Angular 2 version now tacitly endorses server-side decoding.

The selected framework must provide a wide range of configuration options and be simple to configure to suit the needs. For example, Angular 2 is a good choice in this regard because it’s simple to start up and run quickly. React, Vue, and Aurelia, on the other hand, allow you to swap out components as necessary.

With the usage of mobile devices, any application must follow a mobile-first strategy. Businesses realize that smartphone apps are more commonly used than web applications. While some of them may require native iOS or Android applications, there are more modern web front-end stacks that offer appealing possibilities for repurposing this ability in mobile development.

Without a doubt, one of the most critical things to consider when selecting the right system is its overall efficiency. Many of the updated versions of various frameworks provide decent, if not excellent, efficiency. Other considerations, such as efficiency, are also significant. The higher the efficiency of a system, the more opinionated it is.

5.Framework help in the future

Both Angular and Respond have the support of well-known companies such as Google and Facebook. Other systems, on the other hand, depend on volunteers or a limited number of full-time workers. Choose a system for a longer period to see how it is progressing with your study.

While Angular, React, and Vue have a steep learning curve, once mastery is achieved, the possibilities are endless. For example, you can create progressive web apps by combining Angular and React with WordPress and WooCommerce.

Identifying the right framework can prove to be a tough job and if not done right then everything can go wrong. Deciding on which framework to choose is something our team of experts can definitely help you with. Get in touch with us at sales@ateamsoftsolutions.com.