Quick Summary:-
Do you want to know about Native vs Cross-Platform App Development? Don’t worry! We’ve all been there.

Synopsis: There are millions of mobile applications available in the market for both android and apple. These applications update their features and give tremendous performance to the users.

Audience opting for mobile is keen to know the technology and this is a tough task for every mobile company. Launching an application based on the people’s choice and perspective can be a major challenge. It’s their job to choose the correct type of technology for application between native application or cross platform.

In this feature, we’ll discuss the framework of both the technologies i.e. native and cross platform. It will highlight the details based on worthiness, durability and other magnitudes.

What is Native mobile Apps?

Native mobile app development is specifically designed to perform for a single stage. Their programming languages and tools are built in such a way that they are used for specific mobile operating systems. As a result, it utilizes the device and its capabilities at its best. This is also known for its great execution, fast speed and quick response.

For the development of the native application, developers make sure to use tools for both iOS and android called Software development kit (SDK) and an integrated development environment (IDE). If the developers have enough knowledge of using these tools authentically, there will be less chance of collisions and will help in high optimization.

Also, Native apps deliver unusual user experience as it enhances the visuals, tailored to the platform UX. Due to its greater security and high degree of performance, it sometimes offers more capital intensive services to both pre and post-launch.

Native apps are meant for performing languages acceptable for a specific platform. For instance, native apps developed for android will definitely never work for IOS. To understand the scenario, how about we investigate the contradict structure of native that back IOS and android apps separately.

When we had discussed the idea of native application development above in the introduction; it stated the integrated development environment. It is thus a very necessary tool to create the application. Therefore, Android studio is the most used IDE by the developers in the Native Android development.

Using an android studio in the android app development, we get a dynamic code editor along with advanced features. This is possibly done by developer tools that will turbocharge a developing experience. Below are the highlights for some of the advanced features that will help us understand more:

Along with JDK, it also includes other tools like Java Runtime environment (JRE), Java code interpreter, and a Javac compiler. After the completion of the JDK, you can now install an android studio and begin shooting with android applications.

With regards to the decision of structure, Android Studio is a typical pick among every Android engineer because of its broad components and convenient functionality. There are some of the native android apps from the android studio like WhatsApp, Netflix, and others.

To get more about this, we need to pay attention to its advantages and disadvantages. 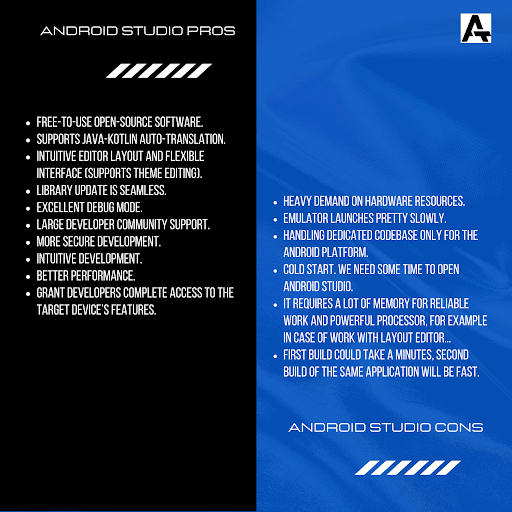 X-code is the authority IDE from Apple and has a memoir in the IOS advanced world. It rapidly maintains the objective-C in the IOS progression. It is responsible for featuring virtually any application like XML interface builder (XIB), storyboard editors, compilers, etc.

In typical Apple’s style, a couple of IOS application building functionalities are locked, distinctly to X-Code. For instance, some of the non-native platforms like Flutter, etc tend to use X-code. Likewise, other alternative IDEs still install the same. Some of its key features include:

All of the above features come with the smattering of skills that will position X-code as a show stopper for IOS development. Fledgling engineers will see the value in thesource handy ‘code checker’ starring any blunders while composing.

Development with the X-code can save a ton of time in coding with ordinarily utilized code and layouts. At the time of creation, it also makes it easy to send your

Likewise, in case you anytime slow down, X-Code’s documentation could scarcely be more serious. The assistance in the library packs a few assets including SDK documentation, Programming interface references, test code, coding guides and nearly anything an engineer needs to investigate successfully.

It is necessary to know that a large part of the native IOS is made with X-code. Linkedin, Slideshare, Asana, Firefox and others consist of X-code in IOS development. Hence, it is important to also know the details including pros and cons below:

What is Cross-Platform App Development?

Cross-stage development focuses on making an application that deals with a few stages. This is finished by utilizing apparatuses like React Native, Xamarin, and Flutter. This is exactly unparalleled to the native application development and apps are made for both android and IOS.

Cross platform pledges to save time and cost but can hazard forfeiting quality simultaneously. It is therefore hard to enclose an app that runs ideally on different platforms. An application for smooth running requires additional layers to avoid low performance.

Cross-stage versatile advances are created by outside vendors. They integrate on the API dependent on the native operating system, SDKs. However new businesses will support the decrease on schedule and cost with cross-stage improvement. But, you’ll need to remember that it is harder to alter the application beyond in the system. 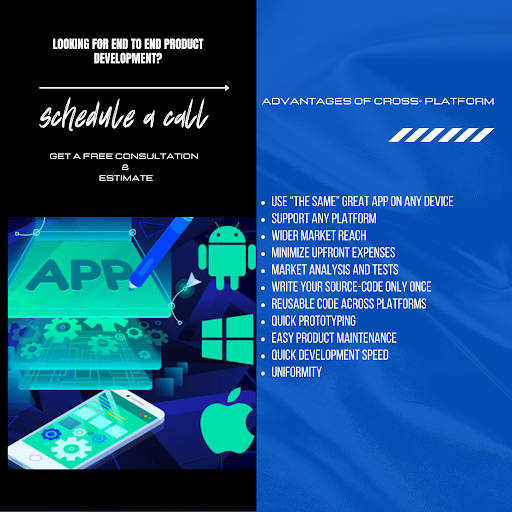 There are many ways of frames that fall under cross platforms but however we ought to explore a few of the top dealers watching out.

React native is undeniably appropriate for cross-stage application progression since it offers consistent quality to the application and considers transposable designing.  Compared to the other cross platform app structures, it utilizes domestic parts from the API and is influential to cost and performances.

It looks like a native application for a specific stage. React upholds logical and illustrative coding which guarantees that the code will tell the truth in the android or IOS. It is based on a string Javascript library called React. It is used for the purpose of small code pieces named ‘components’. These components are re-operative and work to finish an intricate portable application UI.

It has a significance depending upon the broadly utilized programming language, JavaScript. This has a better coding system for android, IOS and even web apps. Most developers with even a little knowledge with web improvement routinely feel that React native is basic and adds a new skill. The implementation of the mobile can be seen in applications like Bloomberg, delivery.com, etc.

The designs behind for all intents and purposes, all React native applications involves three important threads:

UI thread- it is the primary thread used for native android and IOS. It has a capacity to make changes and is common in every type of app.

Shadow thread- it is used for the further calculation of the layout in the react library.

Javascript thread- it finally helps in executing javascript coding. It is also responsible for the frame and functionality of the UI.

To know in elaboration, in essence, let’s take a quick look at the pros and cons of react native

Flutter has started its new journey in the market but gained a lot of buzz into it. Developers are using it for construction of mobile applications that are close to native experiences. It is a flexible to open-source mobile shape that depends on Google’s modifying language called ‘Dart’.

This (dart) programming language is an exceptionally basic part of its design. Ahead of time (AOT) is a composition for Dart used for several other platforms under Flutter. Flutter has also been used for developing apps like new Google ads and Alibaba apps. below are the some hot trademarks that will prove Flutter interesting:

To the better scenario of the Flutter, let’s abstract a look at its pros and cons below:

Xamarin is one of the top acceptable cross application in every platform using the programming language C# and NET. It is ranked as the top notch application under cross platform in 2019-20 worldwide. Some of the popular brands like Siemens, Bosch, UPS and others used such platforms for best results.

Xamarin code is assembled locally and the system uses stages with explicit abilities through API access. Therefore, the outcome is extremely identical to native iOS and Android applications to the extent of execution.

It also has the volume of meeting the deadline with complete requirements by developers. It has created some famous products like MS Azure, Insightly, etc.

Xamarin has a different forms of products involved in mobile development

To get the better circumstance of the Xamarin, we should process its potential gains and disadvantages:

Now that we have a clear depiction about the definition of native application development and cross app development, let’s find out the differences between them that will help the user easy to choose:

Our approach to choose the right framework for your business app

It’s hard to see how far mobile improvement has come lately. The sort of application you decide to work on, there are a bunch of advancements you can browse. So it is necessary to choose the right framework for your business that will always matter.

In Favour Of Native Application:

In Favour Of Cross Platform Application:

Inference to the topic

Despite the fact that the native and cross platform application development has various pros and cons with different features, it will always hinge on the choice of the developer, projects and its skills.

Native applications are as yet the most ideal decision with regards to client experience and execution. While they are all the more expensive, you’ll have lower deformity rates and better visuals.

On the contrary, cross application can be prompt to create and comfortable to use but for the user experience, it can take much time to adopt the process.

At last, it is relevant for every user developer to concentrate and plan on the idea according to 3Ps i.e. price, performance and portrayal.

How can Ateam help?

Choosing the right form of technology isn’t a complete job. But choosing the right skill of developer for installing a technology can be a boon. Let’s not get worried with the thought process of 3Ps for application development i.e. price, performance and portrayal. Rather you can put your trust and confidence in the team of skilled and experienced, Ateam soft solutions.

Ateam will always support your business with the right choice of app development and later will step up your ladder to success. We understand the motive and money counts on every business. This is why we are ready to face the challenge for you 24*7.

Contact with our team today for accomplishing your business objectives.
Reach us at sales@ateamsoftsolutions.com